HomeSports1st T20I: Bumrah back as India look to begin year on a high
Sports
1 year agoJanuary 4, 2020No tags 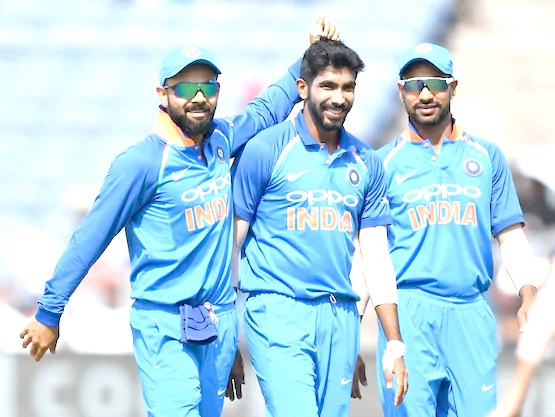 Guwahati, January 4: Team India will aim to start the new year 2020 on a high when they host Sri Lanka for the first T20 International of the three-match series at the Barsapara Cricket Stadium in Guwahati on Sunday. Fast bowler Jasprit Bumrah and opener Shikhar Dhawan will be under spotlight as both cricketers return to the fold from their respective injuries. Jasprit Bumrah had suffered a stress fracture, while Shikhar Dhawan was dogged by injuries throughout 2019.
After being named in the India squad for the T20I series against Sri Lanka, Dhawan had said that he is ready to make a “fresh start” in the new year, reminding his critics that “class is permanent”.
“This is a fresh start for me. I was hit on the finger, then on the neck, bruised eye and then stitches on the knee. Good news is new year is coming. I am happy that KL has done so well. He has grabbed the opportunity. So I am going to go and express myself,” the Indian opener was quoted as saying by PTI on December 24.
Bumrah, on the other hand, termed 2019 a year full of “accomplishments, learning, hard work and making memories”, adding that he is looking forward to 2020.
“2019 has been a year of accomplishments, learning, hard work and making memories, on the field and off it too. And on the last day of the year, I’m looking forward to everything that 2020 has to offer!” Bumrah tweeted.
Besides the return of the two Indian cricket stars, eyes will be on the venue in Assam, where protests over the Citizenship Amendment Act have taken place.
Assam Cricket Association (ACA) Secretary Devajit Saikia told ANI that the match will be played at the Barsapara Cricket Stadium as scheduled.
On Wednesday, Sri Lanka named their 16-man squad for India tour, recalling former skipper Angelo Mathews after a 16-month absence from the shortest form.
Mathews played his last T20 international against South Africa in August 2018 when he led Sri Lanka to a three-wicket victory but failed to impress at the crease, scoring a duck after facing three balls.
No posters, banners allowed during IND vs SL 1st T20I in Guwahati
Posters, banners and message boards will not be allowed inside the Barsapara Cricket Stadium for Sunday’s T20I between India and Sri Lanka, said Devajit Saikia, Secretary Assam Cricket Association (ACA), on Friday. Placards showing “4” and “6” ~ staple at T20 games ~ too will not be allowed because they could be used for surrogate advertisements, he said. No marker pens will be allowed inside as well, he said. Only men’s wallets, ladies handbags, mobile phones and vehicle keys will be permitted inside the ground.
With Guwahati’s Commissioner of Police MP Gupta sat on his right, Saikia said the directive had nothing to do with protests over the Citizenship Amendment Act (CAA) that have engulfed most of the state, leading to curfews, internet shutdowns and at least 4 deaths.
“Everybody is concerned, not just the people of Assam. This is an international event and will have heightened security measures,” said Saikia. To buttress the point, Saikia referred to a stone breaking the Australia team bus window after the T20I here in 2017. “We have to be prepared.” The reason for not allowing placards and posters, said Saikia, was because an arrangement between the Board of Control for Cricket in India (BCCI) and a beverage multi-national has ended, information of which the ACA got around a week back.
A BCCI official said placards that have ‘4’ and ‘6’ printed are usually arranged by the series sponsors and so far the board has heard nothing about them not being allowed. “However, BCCI will abide by whatever the local authorities say on this,” said the official who did not wish to be named.
Gupta did not specify the number of police personnel that would be deployed on Sunday but said no special security arrangements are being made. “We are going through the standard drill and have implemented sufficient number of security personnel,” he said.
“Whatever security protocol we have to follow, we are,” said Saikia. “Nothing more, nothing less. No situation arose where the ACA or the BCCI were skeptical about holding this match. Following a timeline we have prepared for this for a month. That is why we are so relaxed,” said Saikia.
BCCI representative Mamon Majumdar asked spectators ~ around 27,000 tickets have been sold and a full house of 39,400 is expected ~ to “behave very nicely because people from outside, other states will watch us and say spectators are very well behaved.”
That is because ACA wants to use Sunday’s game to ready the ground for hosting matches in the Indian Premier League (IPL) ~ Rajasthan Royals have said they are keen on playing games here which would be a first for the state.
“It is a like a dream situation for us,” Saikia said, adding that the ACA has been trying to convince the IPL Governing Council over the past few years to get games to Guwahati.
(Courtesy: HT/ndtv)