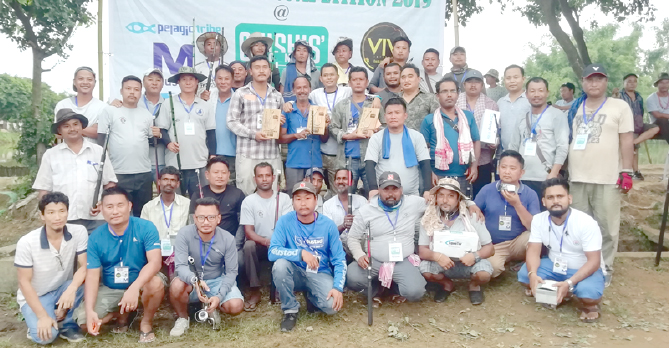 Dimapur, August 16: The 1st Pole Fishing Competition 2019 organised by Chishi’s Pond Management in association with event partner Vivi Enterprises was successfully held on August 15 at Chishi’s Pond at Model Colony, Purana Bazaar, Dimapur.
The day long competition drew a limited 100 participants and hundreds of others as spectators who love the sport.
Mustafa who caught a total catch of 3.82 kilograms emerged as the champion and walked away with a cash prize of Rs. 30,000 and a trophy. Alivito Nakhro who secured second spot with a catch of 3.80 kilograms received a trophy and Rs. 20,000 and second runner up Moasunep bagged Rs. 10,000 along with a trophy for his catch of 3.23 kilograms. The biggest catch of the day award that carried a sum of Rs. 5,000 was won by Akumtemjen.
Other 33 anglers also won rods, reels and other angling accessories. (Page News Service)