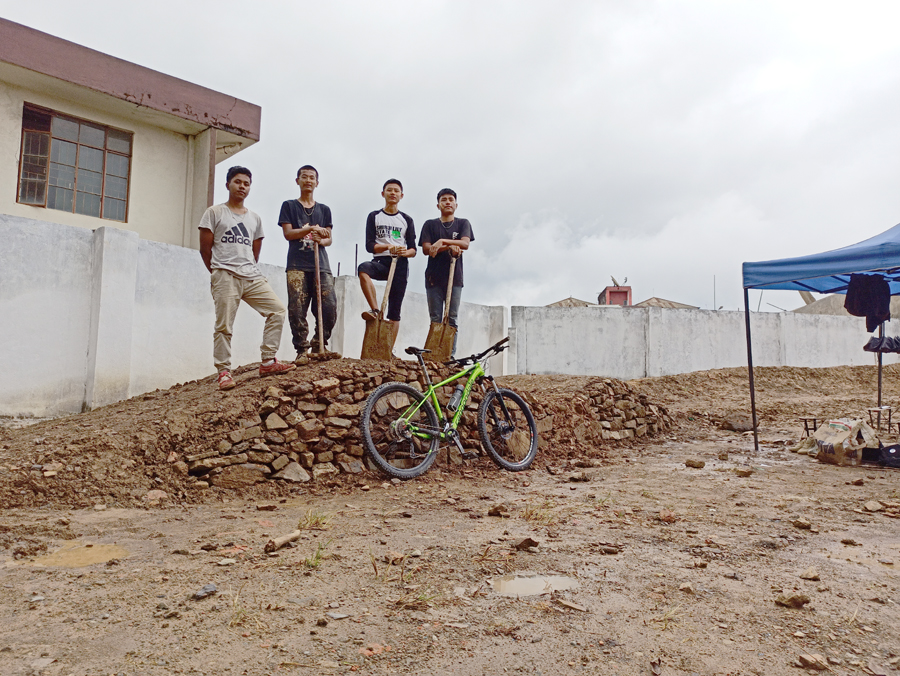 Kohima, September 17: Cyclists in Nagaland and Kohima in particular have a reason to cheer as the construction of the first bicycle pump track in the Northeast is currently underway at the Old MLA Secretariat, Kohima.
The construction of the track is a pilot intervention of the India Cycles4change challenge and a community led undertaking wherein Kohima Smart City Development Ltd (KSCDL) has collaborated with the Nagaland Mountain Biking Association (NMBA) and Tribal Cult.
A pump track, according to Wikipedia is a circuit of rollers, banked turns and features designed to be ridden completely by riders “pumping”- generating momentum by up and down body movements, instead of pedalling or pushing.
Winner of MTB Meghalaya 2018 and a member of Tribal Cult, Kevilebo Zhotso, present at the site along with members from NMBA said, “It’s a dream come true for the cycling community”.
Now that we have a bicycle pump track, it will help improve our riding skills and also create an interest in people who have just started cycling, Zhotso added.
Architect and coordinator of the project, Theja Tsükrü said dedicating a private lane for cyclists is next to impossible in Kohima given the traffic congestions, so under the initiative of CEO KSCDL, Kovi Meyase, the project for a bicycle pump track was initiated. This project is a small initiative but it will give space to cycling enthusiast and all those who are into recreation, Tsükrü added.
Tsükrü also informed that the construction of the track began on September 2 and completion is expected by September 26. However, the date of completion is not confirmed due to the unpredictability of the weather in Kohima, Tsükrü said.
Disregarding the minor challenges such as sourcing soil to build the track and working hours being affected by the rain, the support from the Kohima cycling community has been quite encouraging, Tsükrü concluded.
Kohima along with 95 other cities is taking part in the India Cycles4change challenge which is an initiative of the Smart Cities Mission, Ministry of Housing and Urban Affairs, Government of India.
Cities have been asked to come up with certain initiatives where they will promote cycling, and based on those initiatives and the draft proposals cities will be awarded points and according to those marking, the top 11 cities will receive a fund of Rs. 1 crore each which will be further used for cycling initiatives and infrastructures.
Kohima registered for the India Cycles4change challenge on July 25 and the Kohima Cycles4change challenge is being mobilised through the initiative of KSCDL.
(Page News Service)