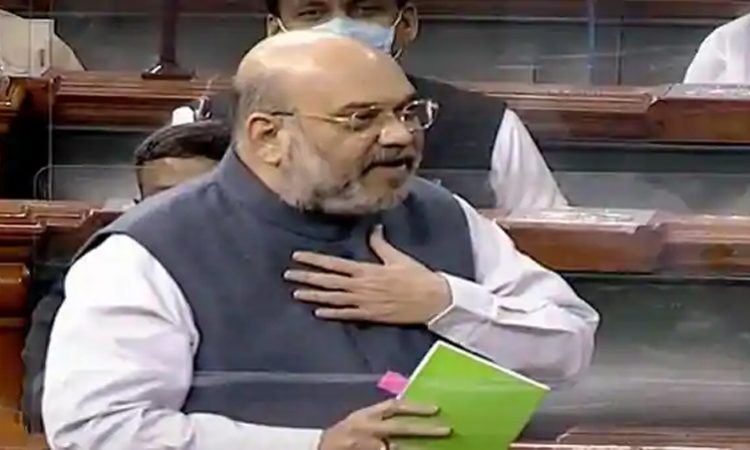 New Delhi, February 9: As many as 197 people are missing while 20 have died in Sunday’s avalanche and flash floods in Uttarakhand, Union Home Minister Amit Shah told Parliament on Tuesday.

He said the figures received from the state government may change and the situation is being monitored round-the-clock at the highest level by the Centre and Prime Minister Narendra Modi himself.
Five more bodies were recovered on Tuesday taking the death toll from the Uttarakhand glacier disaster to 31 as multiple agencies raced against time to reach about 30 workers trapped inside a tunnel in a power project site and 175 people remained missing.
A portion of the Nanda Devi glacier broke off in Uttarakhand’s Chamoli district on Sunday, triggering an avalanche and a deluge in the Alaknanda river system that washed away hydroelectric stations and endangered lives of people living along the banks.
Shah told the Rajya Sabha that the rising water levels washed away the functional Rishiganga small hydro project of 13.2 MW and also affected the under-construction 520 MW NTPC Hydro Power Project at Tapovan on the downstream of the Dhauli Ganga river.
“As per information received from the Government of Uttarakhand, 20 people have died and six persons have been injured so far. As per information, a total of 197 people are reported missing which includes 139 of an under-construction project of NTPC, 46 of the functional Rishi Ganga Project and 12 villagers,” he said.
Twelve people working on the NTPC project and 15 on the Rishiganga one have been saved. In a tunnel of NTPC project, approximately 25-35 people are suspected to be trapped, Shah said.
“Rescue operation to evacuate these people is going on a war footing and all-out efforts are being made for searching missing persons.
“I assure the House that the Centre is extending all possible assistance to the state government for relief and rescue work. The central government is working in close coordination with the state and all necessary steps, which are considered appropriate, are being taken,” he said.
Since a bridge has been washed away due to the deluge, 13 villages around the place of the incident have been cut off. Necessary supplies and medical assistance are being provided to these villages through helicopters, the Union Home Minister said.
The state government has reported that there is no danger of downstream flooding and the rise in water level has been contained, he said, adding “The centre and the state governments are keeping a strict vigil on the situation.”
A meeting of the National Crisis Management Committee (NCMC) under the chairmanship of cabinet secretary was held on February 7, wherein all the agencies concerned were directed to work in close coordination and to extend all requisite assistance to the state administration.
Shah said both the control rooms of the Ministry of Home Affairs are monitoring the situation and are providing all possible help to the state.
The Indo-Tibetian Border Police has set up their control room and 450 personnel of the force with all necessary equipment are engaged in rescue and relief operation. Five Nation Disaster Response Force (NDRF) teams, which have also reached the place of incident.
Besides, eight teams of the Indian Army, including one Engineer Task Force (ETF), are carrying out rescue operation at the incident site. A diving team of the Indian Navy has also reached the site for the rescue operation.
“Five helicopters of the Indian Air Force have also been engaged in the rescue operation. A control room has been established at Joshimath,” Shah said.
Despite adverse conditions at the site, search and rescue operation is being carried out continuously. The Army has cleared debris at the opening of the tunnel to rescue the people trapped in it. A team of the Snow and Avalanche Study Establishment/DRDO has reached the site for surveillance and reconnaissance, he said.
At the ground and government level, the district administration, police and disaster management departments of the state government along with all central agencies have been working for rescue and relief work, Shah said.

He also informed Lok Sabha about the situation in Uttarakhand and the response of the government.
Essential food and medical supplies are being provided to affected villages through helicopters, Shah said.
The state Public Works Department and the Border Roads Organisation have started repairing five damaged bridges. Central Water Commission personnel are on high alert and a DRDO team is keeping a vigil on avalanches, he said. (PTI)