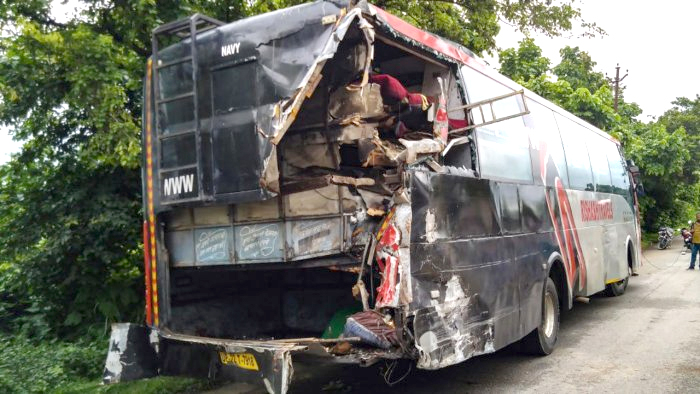 The double decker private bus which was hit by speeding truck at the accident site on Lucknow-Ayodhya road, in Barabanki, Wednesday, July 28, 2021. Credit: PTI Photo

Barabanki (UP), July 28: At least 18 people were killed and 25 injured after a truck rammed into a stationary double-decker bus here, police said on Wednesday.

The accident took place on the Lucknow-Ayodhya highway under Kotwali Ramsanehighat area late on Tuesday night. The private bus was carrying over 130 passengers to Bihar from Ludhiana in Punjab, they said.
The axle of the bus broke down and it was parked on the road when a speeding truck coming from behind hit it, killing 18 people on the spot and injuring 25 others, the police said.
Some passengers were standing or resting outside the bus while others were sitting inside while waiting for the axel to be repaired when the incident took place, they said.
The victims, mostly labourers from Bihar, were returning home after sowing paddy in Punjab and Haryana, the police said.
Police rushed to the spot after receiving information about the accident and the rescue operation was carried out with the help of locals. The injured were rushed to a local hospital and from there eight people, who were seriously injured, were referred to the trauma centre in Lucknow, Additional Director General of Police, Lucknow Zone, S N Sabat said.
It was raining heavily when the accident took place and this posed some problems in the rescue operation, he said.
Additional Chief Secretary, Home, Awanish Awasthi in Lucknow said Prime Minister Narendra Modi spoke to Chief Minister Yogi Adityanath about the accident and extended his condolences to the families of the deceased.
The CM has also expressed his condolences and directed the district magistrate and the superintendent of police of Barabanki to provide the best medical care to the injured and make proper arrangements for taking other passengers of the bus to their destinations, Awasthi said.

Modi has also announced an ex gratia of Rs 2 lakh each from the Prime Minister’s National Relief Fund for the families of the deceased. The injured would be given Rs 50,000 each. (PTI)