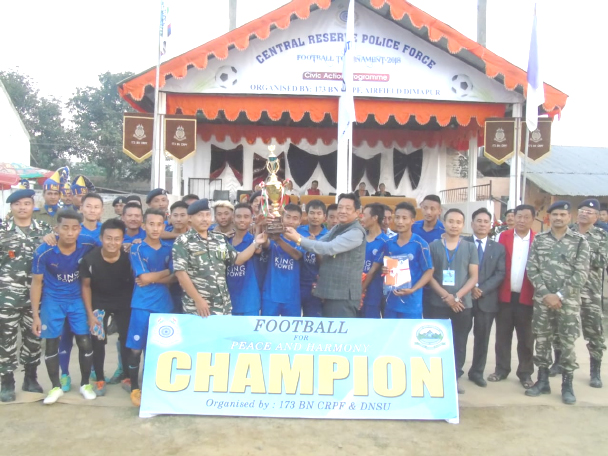 Dimapur, November 30: The first football tournament organized by 173 BN. Central Reserve Police Force in collaboration with Diphupar Naga Students’ Union under the theme ‘Peace and Harmony’ concluded today here at Diphupar local ground in the presence of Dr. T. Lima Jamir, Chairman of Impact Foundation International as Guest of Honour and Joseph Keishing, Commandant 173 BN. CRPF as the patron.
Speaking on the occasion during the valedictory programme, Dr. Jamir said that the gesture of the CRPF to organize such an event is wonderful and expressed his gladness that CRPF has also been doing many other activities for the society to harbor peace and harmony, mentioning the activities that the force had carried out lately to improve the Lotha Middle School at Diphupar and others.
Asking the CRPF to keep doing the good work, he urged the players to be not disheartened who could not make it to the top but have persistence.
He said that football has become a lucrative career option and it is time that parents and elders should encourage the young to take it up if they have the talent and pursue it. He also asked them to draw inspiration from legendary Dr. T. Ao and if they are disciplined and work hard, they can even be better footballers and Dr. Ao.
Previously, Keishing in the welcome address had mentioned that the tournament was organized to promote peace in a time of discord and it would not have been possible without the civil societies of Diphupar like the DNSU, DNYO and others.
The 5-day tournament had commenced on November 26.
Results:
Winner–Xelhozhe FC
Runners-up–Diphupar FC (A) 1-0
Man of the tournament-Koto Kiho of Xelhozhe FC
Highest Scorer– Koto Kiho of Xelhozhe FC and Dilo Koza of Koza Brothers FC (Both scored 5 goals each)
Best Goalkeeper-Inaka of Diphupar Village FC
(Page News Service)

Ranji Trophy: Nagaland bowled out for 243