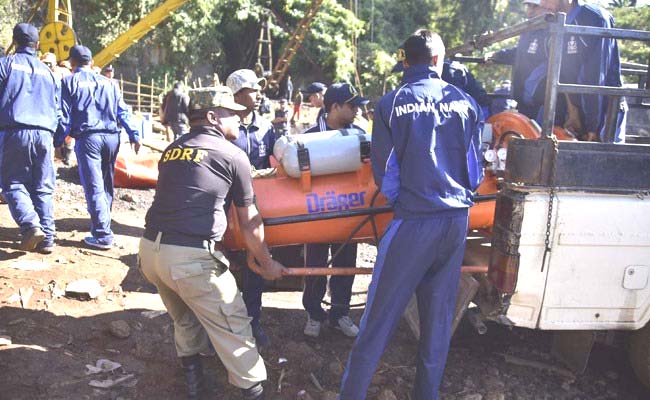 LUMTHARI, December 30: The multi-agency operation launched on Sunday to rescue the 15 miners trapped in a 370-foot-deep coal mine did not yield much results as the divers from the Indian Navy and NDRF could not reach the bottom of the pit, the officials said.
The joint operation was launched after the naval team leader, Lieutenant Commander Santosh Khetwal, went down the vertical shaft of the mine till the surface of the water, where he assessed the situation before sending in the divers, the officials said.
“Six divers from the Indian Navy and NDRF went down the shaft of the mine and reached a depth of about 80 feet from the surface of the water. They spent over two hours searching for traces of the miners in the shaft,” East Jaintia Hills district Superintendent of Police (SP) Sylvester Nongtynger told PTI.
According to Navy officials, the depth of water from the surface till the bottom of the pit was expected to be over 150 feet, he said.
Assistant Commandant of the National Disaster Response Force (NDRF), Santosh Kumar, who is heading two teams of his force in the search-and-rescue operation, said they managed to place an inflated boat in the flooded water which could serve the purpose of a platform for the divers to keep their equipment.
He added that the divers would go down the shaft of the mine again on Monday in a bid to reach the bottom of the pit.
The SP said the divers could not detect anything on Sunday. They would be using hi-tech equipment, including a remotely operated vehicle, to search for the miners tomorrow.
He added that the horizontal holes, where the miners were stuck, were suspected to be at the bottom of the shaft.
The officer said pumps were expected to be pressed into service on Monday, in an attempt to lower the water level at the mine shaft.
At least 10 high-powered pumps from the Odisha Fire service, along with 21 personnel, had reached the accident site and a submersible pump from the Coal India Limited (CIL) was expected to arrive anytime Sunday night, he added.
The CIL had promised to send at least six pumps from their various bases across the country, the SP said.
Asked about the pumps promised by the Pune-based Kirloskar Brothers Limited, he said he was yet to get any information about those even as a team from the company had visited the site earlier. (PTI)