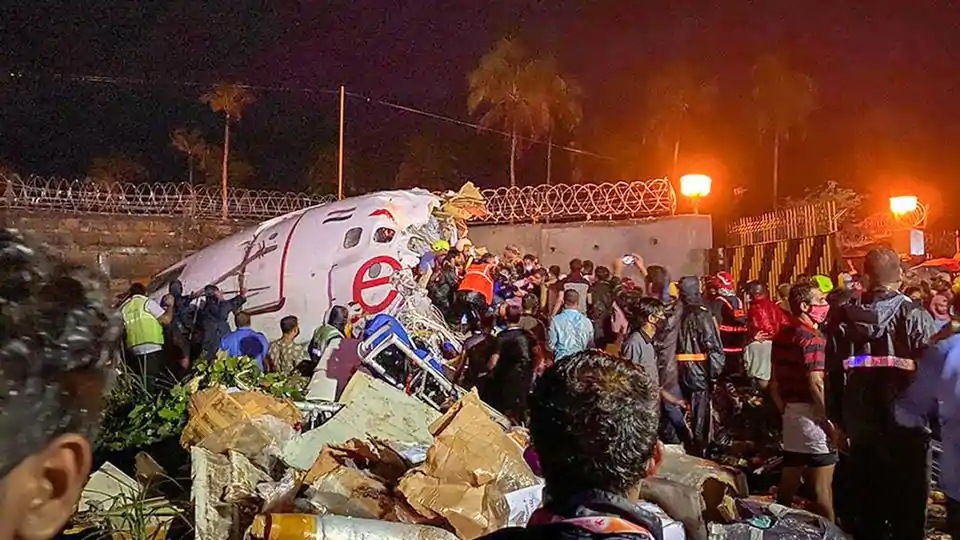 Kozhikode, August 7: Sixteen people were killed and several others injured when a Dubai-Calicut Air India Express flight with 191 passengers and crew on board overshot the runway at the airport here and fell into a valley, breaking into two portions, on Friday evening,police sources said.
The mishap occurred at 1941 hrs.No fire was reported at the time of landing, an AIE statement said.
Police said the dead included the plane’s pilot.
The Civil Aviation Ministry said the flight IX 1344 operated by B737 aircraft from Dubai overshot runway at Kozhikode at 7.41 PM on Friday. “No fire reported at the time of landing,” it noted.
There were 174 passengers, 10 Infants , 2 Pilots and 5 cabin crew on board the aircraft, the ministry added.
“As per the initial reports rescue operations are on and passengers are being taken to hospital for medical care.
We will soon share the update in this regard,” the ministry stated.
Help centres are being set up in Sharjah and Dubai, the statement said.
A DGCA staetmentsaid after landing at Runway 10, the plane continued running till the end of the runway and fell into the valley and broke into two portions.
Kerala Chief Minister Pinarayi Vijayan expressed shock over the accident.
CMO sources said Chief Minister spoke to Prime Minister, Narendra Modi and the latter assured him all help and assistance from the Centre.
Vijayan informed him that rescue operations were in full swing, the sources said.
Vijayan has also asked all government agencies to engage in rescue operations using all government facilities.
The Chief Ministerhas deputed state minister A C Moideen to coordinate the rescue operations.
An IG of police has been deputed to oversee the rescue operations.
Fire and Rescue teams of two districts– Kozhikode and Malappuram have been engaged.
According to information from Kozhikode medical college, seriously injured people have been admitted there.
The condition of a mother and child injured in the accident was very serious, Health minister K K Shailaja said. (PTI)