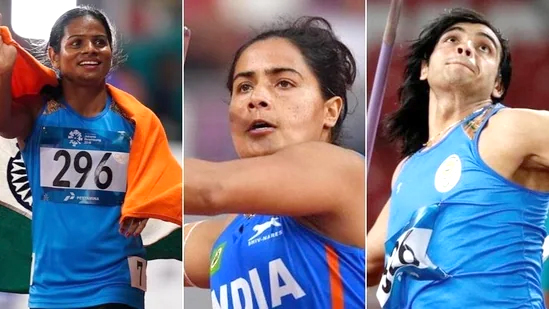 Twelve individual athletes, including star javelin thrower Neeraj Chopra, booked automatic quota for the Olympics by breaching the qualification mark, while the trio of Dutee, Rani and Jabir made it to the Games through rankings. The men’s 4x400m relay team qualified through top list.
Dutee was 41st and 50th respectively in the list of 56 athletes to compete in both the 100m and 200m events, while Rani was at 18th (out of 32) and Jabir at 32nd (out of 40).
The mixed 4x400m relay team had booked an Olympic berth after reaching the final of the World Athletics Championships in 2019.
Long jumper M Sreeshankar, shot putter Tajinder Pal Singh Toor, discus throwers Kamalpreet Kaur and Seema Punia qualified for the Olympics this year while the remaining have done so either in 2019 or last year.
However, the women’s 4x400m relay team missed out as it was placed at 17th spot while 16 were to get the Olympic slots.
“The Olympic qualification period for all stadium events finished on June 29 and World Athletics’ Olympic qualification system has now been finalised,” the World Athletics said in a statement.
“…showing that about 70 percent of the athletes in individual events have qualified by entry standard and 30 percent by world ranking position, while 100 universality places have been awarded.
“Some 1900 athletes from more than 190 countries will compete at the Tokyo Olympic Games when the athletics programme begins on 30 July.”
The qualification of Dutee (both in 100m and 200m), Rani and Jabir was on expected lines as they were within the bracket to make it to the Games in the Road to Tokyo list.
The men’s 4x400m relay team was placed 13th out of 16 to compete in Tokyo based on the timing of 3:01.89 clocked during the National Inter-State Championships on Friday last.
Dutee had clocked 11.17 seconds during the Indian Grand Prix 4 in Patiala on June 21, two-hundredth of a second outside the automatic qualification standard of 11.15 seconds.
Rani had bettered her own national record with a throw of 63.24m during the Federation Cup in March before a performance of 62.83m in the National Inter-State Championships this week.
Jabir had run a personal best of 49.78 seconds on Saturday last during the National Inter-State Championships, though he has a personal best of 49.13 seconds.
Long jumper M Sreeshankar had made it to the Olympics with a national record jump of 8.26m during the Federation Cup in March while shot putter Toor booked a Games’ berth with another national record mark of 21.49m during the Indian Grand Prix 4.
Kaur made it to the Olympics during the Federation Cup in March with a performance of 65.06m and then bettered her own national record with a throw of 66.59m during the subsequent Indian Grand Prix 4 on June 21.
Veteran Punia was the last to bag an automatic qualification spot for the Olympics with a throw of 63.72m on the final day of National Inter-State Championships on Tuesday.
The Athletics Federation of India’s selection committee will meet on Friday to pick the team for the Olympics.
It will basically be the picking of the two relay teams — men’s 4x400m and mixed 4x400m.