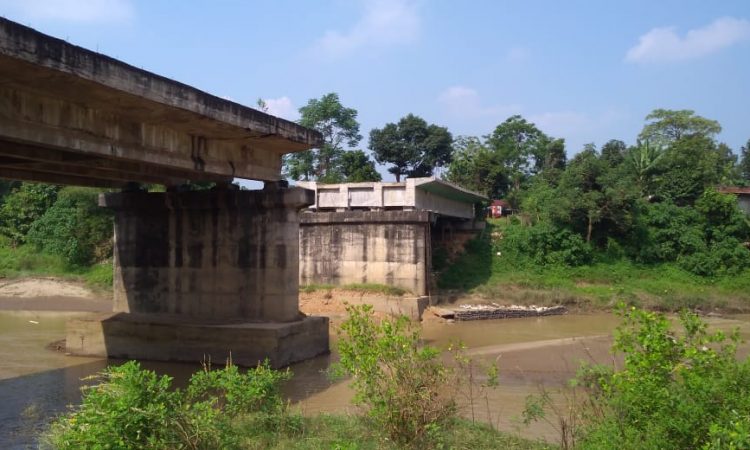 Dimapur, October 22: For the last 14 years, around 30,000 people from 56 villages are awaiting completion of a 340 meters long bridge that should have been completed in 2007. Despite the potential advantages and economic implications, the bridge is far from being completed.
Till today, about 80 meters of the bridge remains to be constructed, and the rest that had been completed are of such poor state that after a recent inspection by the PWD (Roads & Bridges), it was decided that further construction of the bridge would be allowed only after assessment of the safety of the bridge by “experts from Delhi.”
On Tuesday, residents from Khugoboto area representing different bodies told the media that in the year 2005 the construction was allotted to M/s Pabscon but soon after problems cropped up between Pabscon and the department and the construction was halted.
The Khughaboto Area GBs’ Association (KTKK), after waiting patiently for the concerned parties to clear their dispute, on April 18, 2017 asked the parties to resolve their differences within 15 days in the larger interest of thousands of people for whom the bridge is the lifeline.
But even after that when the case remained unresolved, the citizens of the area crowd funded about Rs 1 crore and constructed a part of the under construction Shozukhu-Zukihe Bridge. The work for the same started in October 2017. The bridge, nevertheless, isn’t constructed fully.
Kakheho Chishi, a resident of the area, said lately Pabscon has resumed work after the parties sorted their differences, but when the people of the area inspected the ongoing construction, the work was found to be unsatisfactory, and the work is now stalled till cleared by experts.
The area people on Tuesday demanded the department to avail the service of experts immediately as the construction is supposed to be undertaken in November when water level is low in the river. In the absence of the bridge, the people are forced to ply longer routes and use a dangerous makeshift bridge.
They also cleared that the people are not asking for compensation for the crowd funded construction but the Government should complete it. (Page News Service)