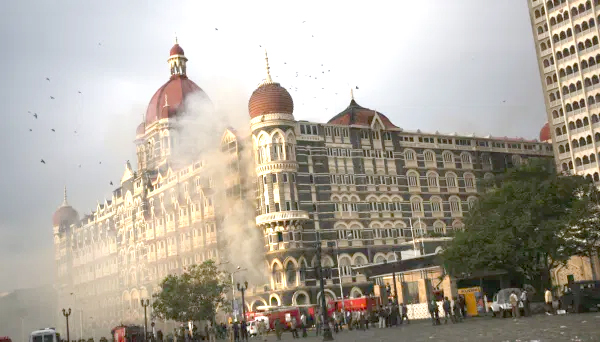 Mumbai, November 25: The twelfth anniversary of the 26/11 Mumbai terror attacks will be observed on Thursday, with the city police organising an event to pay homage to the martyred security personnel, to be attended by only a limited number of people in view of the pandemic, an official said.
The ceremony will be held at the newly-built memorial at the police headquarters in South Mumbai. It will be attended by the family members of the martyred police and security personnel, the official said on Wednesday.
Maharashtra Governor Bhagat Singh Koshyari, Chief Minister Uddhav Thackeray, Home Minister Anil Deshmukh, DGP Subodh Kumar Jaiswal, Mumbai police commissioner Param Bir Singh and other senior officers will pay their respects to the martyrs, he said.
The martyrs’ memorial has been relocated from the site at Police Gymkhana in Marine Drive to the police headquarters at Crawford Market because of the ongoing work on the Coastal Road project, the official said.
On November 26, 2008, ten Lashkar-e-Taiba terrorists from Pakistan arrived by sea route and opened fire, killing 166 people, including 18 security personnel, and injuring several others during the 60-hour siege.
Nine terrorists were killed by the security forces including the NSG, the elite commando force of the nation.
The then ATS chief Hemant Karkare, Army Major Sandeep Unnikrishnan, Mumbai’s additional police commissioner Ashok Kamte and senior police inspector Vijay Salaskar were among those killed in the attack.
Ajmal Amir Kasab, the only terrorist to be captured alive, was hanged four years later on November 21, 2012.
Ex-marine commando recalls night of 26/11
Former marine commando Praveen Kumar Teotia, who led his team during the counter-terrorist operations in the wake of the 26/11 attack in Mumbai, gives a minute-by-minute account of that deadly night inside the Taj hotel in his memoir.
He suffered multiple injuries during the operation but his quick response and counter-attack saved more than 150 lives.
“26/11 Braveheart: My Encounter With Terrorists That Night”, published by Rupa, is the story of Teotia and how he fought the terrorists.
On that fateful night, Teotia was heading towards his naval base around 8 pm.
“Who would have imagined that 10 men from Pakistan would come sailing through the Arabian Sea in a small boat and would launch the most dastardly attack on the city? And hardly would have I imagined that few hours from now, I will be facing these fidayeen, inside the Taj, eye to eye, and my life would change forever,” he says.
Giving details of what happened inside the Taj after the marine commando team of the Navy reached there, he says, “There was information given to us earlier that there were at least four terrorists inside. Later on, the High Level Enquiry Committee confirmed in its findings the presence of four terrorists in the Taj. Two terrorists had stealthily entered from the main lobby (of the Taj Towers) while the other two, who had fired at Leopold, entered by North Cote entrance (of the Heritage Taj) and joined up with their partners.
“There was no chance of a police response when terrorists had attacked Leopold Cafe at about 9:30 p.m. These two armed men had suddenly walked in and began firing indiscriminately. After creating a bloodbath there, they hastened towards the Taj.”
Ever since the team entered the Taj, there was death and mayhem around us – in the halls, the corridors, and the reception area.
“The lazy opulence of the place had been disrupted and what stood before us was a shaken Taj. Bullet-ridden bodies were lying amidst the inferno and bloodbath. Some lucky survivors had to be pulled out with corpses lying on top of them, an experience that would torment them for life,” Teotia recalls.
He was badly injured while fighting the terrorists. Four bullets ripped through his body, a lung was punctured, four ribs were shattered and splinters scattered all over his chest, doctors attending to him declared that his life had been cut short, that he could never swim or run. But he proved everyone wrong.
A Shaurya Chakra awardee, Teotia overcame his injury and went on to participate in several marathons and the Ironman championship. He is now a life coach and a physical trainer, and also gives special weapons and tactical training to state police commandos.
In the book, Teotia also writes about the quality of counter-operation gear and weapons.
When he and his team went to collect arms and gear from the armoury division, they came to know that there was no MP5 weapon (a close quarter battle weapon used in close encounters or operations) for them. They were left with no choice but to take the AK-47s that were available.
For this key operation, they were given normal combat helmets that were good enough only to protect the head from stones or other objects, he says.
“But we could not have possibly gone without the headgear and hence had no choice but to wear the poor substitute. I, however, became a bit agitated when we were told by the armoury division that there were no specialised bulletproof jackets available,” he writes.
“We were then provided with a normal buoyant bulletproof jacket. In other words, this was a jacket that had a simple plate in the front and could only take shots from a pistol. This jacket was also used to prevent someone from drowning,” he adds.
Each commando was also given two grenades – a stun grenade and the other a live one. (PTI)