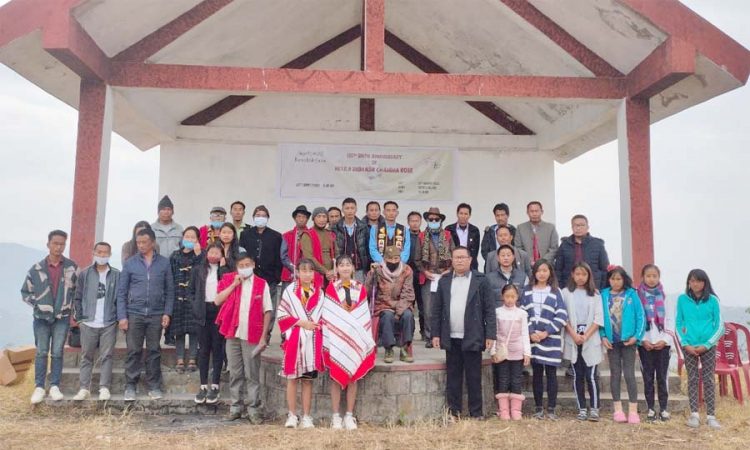 Swuro shared a brief experience and history of how Netaji spent his stay at Chesezu.
In his speech, Kejaroko Pieru, Proprietor of Pier Tours, Kohima, thanked the villagers on behalf of Indiatourism for happily accepting the proposal to celebrate the anniversary at Chesezu.
He also shared the prospects on how Chesezu can become an eco-tourism destination.
Muleyi Khesoh, ex-chairman of Chesezu Village Council thanked Indiatourism for choosing Chesezu village to observe the 125 birth anniversary of Netaji.
He also acknowledged Indiatourism for inspiring the community, and encouraged the upcoming generation to carry on the legacies and history of Netaji.
With the SOPs in mind, around 45 participants including 13 school children participated in the art competition on the theme “Netaji at Chesezu”.
In special folk tune presentation, Rapra Swuro and Thiyiveyi Nyekha sang a song about Netaji and the Japanese at Chesezu while Nuvetalu Nyekha and Nukhrutalu Nyekha sang about the legacy and history left by Netaji at Chesezu.
PVHSS: Meanwhile, Pranab Vidyapith Higher Secondary School (PVHSS), Dimapur on Saturday celebrated the 125th birth anniversary of Netaji Subhas Chandra Bose.
A press release from the school informed that the programme began with the universal peace prayer followed by garlanding the portrait of Swami Pranabanandaji Maharaj and Netaji Subhas Chandra Bose.
Principal Monoj Bhattacharjee deilvered a speech next while songs were presented by the teachers of the school. A motivational speech was delivered by the senior-most teacher Ranu Purkayastha.
Dimapur Bongs: Dimapur Bongs celebrates Parakram Diwas today to commemorate the 125th birth anniversary of Netaji Subhash Chandra Bose at the Dimapur Bongs office premises. The programme started with Indian National flag hoisting, followed by garlanding to Netaji’s statue. Neha Ghosh and her group presented INA anthem. Various patriotic dance and songs were presented to mark the importance of the day. The Sargam band also performed various patriotic numbers to pay a tribute to the Netaji.
Ganesh Sharma, advisor of Dimapur Bongs, who is also the Superintendent of DMC, delivered a motivational speech highlighting the contribution of Netaji towards the freedom struggle of India. He urged the youth members and children to feel proud about their rich culture.
NSKK: The 125th Birth Anniversary of Netaji Subash Chandra Bose was celebrated at Railway Netaji Colony, Dimapur on January 23, organized by Netaji Subash Kala Kendra, an organization of Netaji Birthday Celebration Committee, Dimapur. The celebration was interspersed with songs in honour of Netaji by students of NSKK, Sucharita Mahajan, Ritika Chakraborty along with other participants of NSKK, Dimapur.
The program commenced with welcome speech by Sushanta Bhattacharjee, Principal NSKK and National flag was hoisted by Sabooj Sharma, Head Cashier of Canara Bank, Dimapur Branch. Dignitaries & Seniors members delivered short speech about on the life & times of Netaji Subash Bose & also reflected that the time has come to unite & that the youth should follow the path of Netaji & be honest, brave, dedicated, fearless, self confidence in performing and not to forget the rich culture & tradition of the our motherland. (Page News Service) 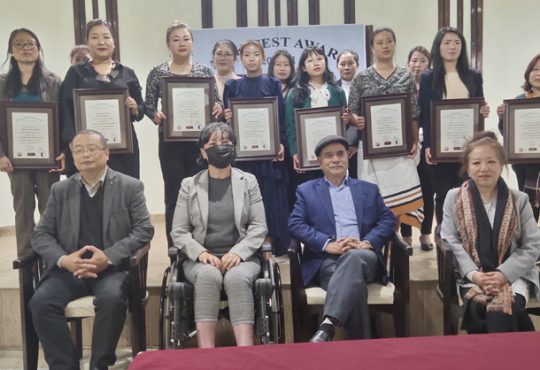