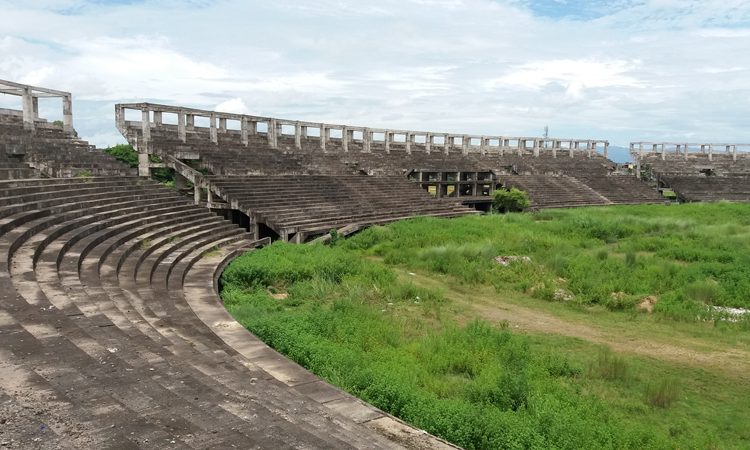 Dimapur, August 22: The Multi-Discipline Sports Centre (MDSC) in the erstwhile State Stadium is yet to see the light of the day due to lack of funding even as the half-constructed structure stands testimony of Government’s apathy towards games and sports.
The construction of the stadium began in 2006, thanks to the then energetic Chief Minister, Neiphiu Rio, and was supposed to be completed within three years time with funds from the Centre as well as the state Government. But the snail-pace construction works has lingered on till date.
Concerned over the delay in the construction works, the ACAUT Nagaland today visited the MDSC where the construction works are stalled due to lack of funds. Spread over an area of 64 acre, the only visible structure which can be seen is the half-constructed stadium, the construction of which began in 2006.
The site engineer present at the spot informed that the size of the stadium is 190 metres x 135 metres with a sitting capacity of 35,000 people. He informed that though the funds are not being made available, the construction work is going on with money being invested by the construction company.
When ACAUT and media persons met the contractor, Neibu Nagi to know about the progress of the stadium, he said that the project started in 2006 after the then Chief Minister, Neiphiu Rio took the initiative with a vision to hold National Games and handed over the contract to him.
He said in the beginning the erstwhile Planning Commission, Government of India gave Rs 10 crores per year for 6 years, but after that no funds were provided.
Nagi disclosed that he had submitted the last bill in December 2013. He said that for the last 5 years, he has not received any funds which have resulted in the project remaining uncompleted.
He said the total project of the MDSC covers an area of 64 acres out of which 15 acres have been given to Sports Authority of India, which would construct infrastructure to facilitate training of youths.
Lamenting that the ambitious project is lying in limbo, Nagi said he does not want to give up as it is a specialized project. He said if the government provides funds, the project can be completed within next three years.
He disclosed that state like Meghalaya has plans for 25 stadiums in the state under Khelo India, but Nagaland has not taken up such plans or projects.
On being asked about the funds being released till date, Nagi disclosed that he has received Rs 57 crores in the first phase, adding as per the agreement, the contractor should get payment every month.
Nagi made an appeal to the Chief Minister of Nagaland to make funds available for completion of the project.
Earlier, ACAUT member, Tia Longchar said that there are many projects in Nagaland, where foundation stones have been laid but the project never got completed. He said lots of youngsters are talented in sports, but they lack proper training and facilities, adding the state Stadium has been a dream for every Naga where major sporting events would take place.
Once dubbed as ‘dumping ground’ for antisocial activities, the construction of the stadium has changed the whole scenario, he said.
Lamenting that the construction of the stadium has stopped for many years, the ACAUT member hoped that the new government would take up the issue seriously and facilitate completion of the stadium.
Football coach, Mughato Sumi, who was also present, said that there are many talented Naga youths in the field of football, but there are no proper football ground for practice. He disclosed that students are just practicing in small ground, which is not proper for them, especially when most of important games are coming up in the country.
It may be mentioned that the Multi-Disciplinary Sports Centre Dimapur is meant for all disciplines of sports.
It is believed that starting with a proper stadium, the MDSC would not only encourage sports in the state at a high professional level, but also enable the state to bag major sporting events now going on in other states. (Page News Service)