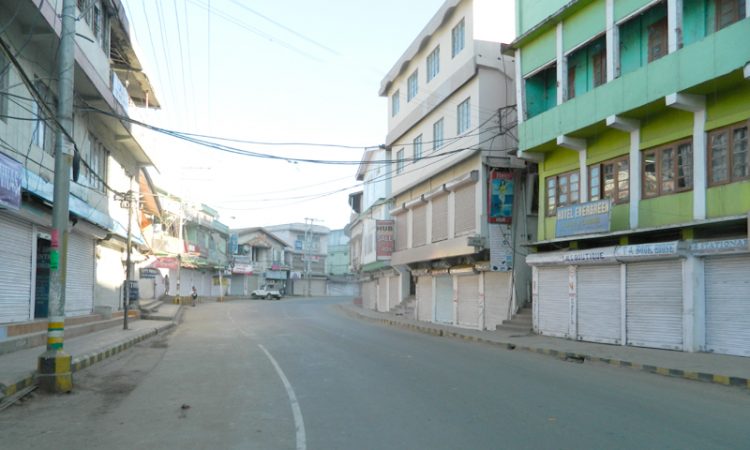 Kohima, January 8: The 11-hour total bandh called by Naga Students Federation (NSF) in support of the North East Students Organisation (NESO) in seven out of 11 districts in Nagaland passed off peacefully on Tuesday without any untoward incident.
The bandh was not imposed in four districts – Mon, Tuensang, Longleng and Kiphire which falls under Eastern Nagaland Students Federation (ENSF).
An ENSF official said as concerned body of the region, it is in similar lines with other organizations of the region on the Bill and that they are also against the passage of the Bill in parliament. He, however, clarified that since ENSF is not an affiliated member of NESO they did not impose the bandh.
In Dimapur, as in the other seven districts of the State, all business establishments, schools, colleges, banks and Government institutions remained closed during the bandh.

While no untoward incidents were reported, people coming to Dimapur by trains and flight faced inconveniences due to the bandh. Hundreds of passengers who have come to Dimapur by train were found stranded at the Dimapur Railway Station as they could not find any transport to reach their homes. It was the same case at Dimapur Airport. . There were a large number of students from NIT Nagaland, who had come back after their vacation to join the institution, but had to remained at the airport till late afternoon.
Earlier in December when a 12-hour bandh was called in Dimapur, the district administration and police had made adequate security arrangements and transportation were made available at Dimapur Airport and Railway Station for the stranded passengers. But today no such facilities were found in any of the places.
The NSF in consonance with NESO imposed the total bandh affecting normal life from 5 am to 4 pm today protesting against the Citizenship (Amendment) Bill 2016 for its detrimental effect if passed in Parliament while also fearing the crisis arising out of the unabated influx of illegal migrants from Bangladesh, which has brought about serious damage and challenges to the indigenous people of North East region, said NSF president Kesosul Christopher Ltu while addressing media persons here on Tuesday.
The Citizenship (Amendment) Bill which was introduced in the Lok Sabha on July 16, 2016, intends to amend the Citizenship Act, 1955 and seeks to give Indian citizenships to illegal migrants on religious preference especially, to those illegal immigrants who have come from Afghanistan, Bangladesh and Pakistan, he said.
As per the directive of NSF, its federating units successfully and peacefully imposed the bandh in 7 districts while there has not been any report untoward incident from any quarter, Ltu said.
All business establishments, educational institutions and Government offices were closed while people remained indoors and vehicles stayed off road.
However, educational institutions having exams and others on health grounds and those attending wedding along with district administration, police and security forces were exempted from the purview of the bandh, he said.

The respective district administration and police had also deployed security personnel to thwart any untoward incident.
After 4 p.m. some of the business establishments, including small time, groceries and hoteliers opened their shutters while traffic movement became normal.
The NSF president expressed hope that the imposition of the bandh would sent a strong message not only to the Centre but also to the State Government in making any further move on the Bill.
Maintaining that other State governments of the region had been openly expressing resentment over the proposed Bill, Ltu lamented that Nagaland Government had been making the excuse of the State being protected by the Bengal Eastern Frontier Regulation Act or the Inner Line Permit (ILP).
He cited that Dimapur district which is the commercial hub of Nagaland does not fall under the purview of ILP and the unabated influx of illegal immigration would have a direct impact on the demographic aspect of the State.
He also pointed that monitoring of ILP in Chumukedima check gate was weak because of which illegal immigrants have been easily entering the State capital and other districts.
The students’ leader urged the State Government to pass strong resolution against the proposed Bill.
NSF social and culture secretary Dievi Yano was also present during the media briefing. (Page News Service)