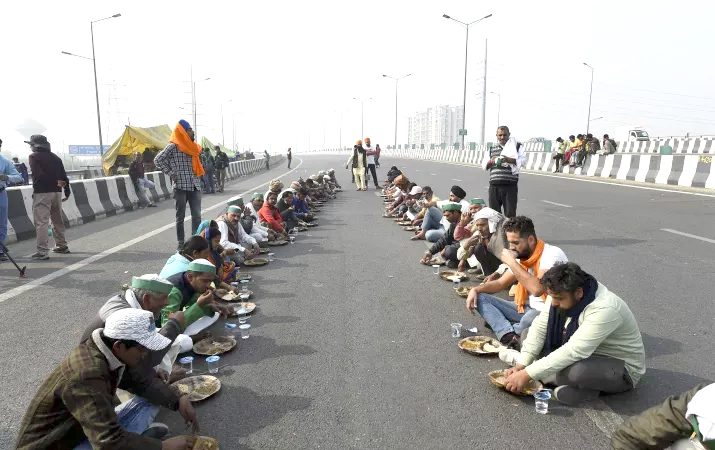 Farmers prepare food for their fellows during their protest against the Centres new farm laws, at Singhu border in New Delhi, Friday, Dec. 4, 2020.

New Delhi/Hyderabad/Mumbai, December 6: Opposition parties, including many regional outfits, on Sunday came out in strong support of the Bharat Bandh’ on December 8 called by farmer unions which have been protesting on Delhi’s borders for 11 days demanding the repeal of the Centre’s new agri-marketing laws.

Prominent leaders including Congress president Sonia Gandhi, NCP leader Sharad Pawar, CPI(M) general secretary Sitaram Yechury, DMK chief M K Stalin and PAGD chairman Farooq Abdullah also issued a joint statement backing the proposed day-long strike and pressed the Centre to meet the legitimate demands of the protesters.
Claiming that their agitation has spread across the nation, farmer leaders, who have maintained that their protest is apolitical, welcomed the support and urged all to come forward to make Tuesday’s Bharat Bandh a success.
After five rounds of talks between the Centre and the farmer unions failed to end the impasse, the two sides are again set to meet on December 9, a day after the countrywide strike.
“This agitation is not only of Punjab farmers but is of the entire nation. We are going to strengthen our agitation and it has already spread across the nation,” farmer leader Baldev Singh Yadav said at a press conference.
“Since the government was not able to deal with us properly, we gave a call for Bharat Bandh,” he said and appealed to everyone to make sure that the bandh remains peaceful.
“We won’t let anyone turn it violent and would take strict action against them. We request everyone to be part of the bandh,” he said.
During the bandh, shops and businesses will remain shut. Ambulances and other emergency services will be exempted, farmer leaders said.
The Congress, NCP, Shiv Sena, TRS, DMK, SP and the AAP joined the Trinamool Congress, RJD and the Left parties in supporting the strike call.
NCP chief and former union agriculture minister Sharad Pawar warned the Centre that if the deadlock continues, the agitation will not be limited to Delhi and people from across the country will stand by the protesting farmers.
Pawar is scheduled to meet President Ram Nath Kovind on December 9 over the ongoing farmers’ protest, his party said.
Expressing the Congress’ “wholehearted” support to the strike call, party spokesperson Pawan Khera said it will hold protests that day at all district and state headquarters in solidarity with the demands of the farmers.
India’s first Olympic medallist in boxing and party leader Vijender Singh threatened to return his Rajiv Gandhi Khel Ratna award if the central government does not withdraw the farm laws. Several sportspersons from Punjab and Haryana have also said that they will return their awards.
TRS president and Telangana Chief Minister K Chandrasekhar Rao said the party rank and file would actively participate in the bandh to ensure it was a success, according to an official statement.
In their joint statement, Sonia Gandhi and other opposition leaders said they extend “solidarity with the ongoing massive struggle by the Indian farmers” and their call for a Bharat Bandh on December 8 demanding the withdrawal of these “retrograde ” Agri-laws and the Electricity Amendment Bill.
Also among the signatories were RJD’s Tejashwi Yadav, Samajwadi Party chief Akhilesh Yadav, CPI general secretary D Raja, general secretary of CPI(ML) Dipankar Bhattacharya, AIFB general secretary Debabrata Biswas and Manoj Bhattacharya, the general secretary of RSP.
Several regional outfits also issued joint statements in states like Assam and Tamil Nadu backing the bandh call.
In Tamil Nadu, Stalin, TNCC chief KS Alagiri, MDMK founder Vaiko and Left leaders, among other DMK allies, said the ongoing protest by farmers was growing every day and drawing global attention.
The DMK chief had led a state-wide protest on Saturday against the farm laws.
In a statement, Stalin, TNCC chief KS Alagiri, MDMK founder Vaiko and Left leaders, among other DMK allies, said the ongoing protest outside Delhi by farmers was growing every day and drawing global attention.
Actor Kamal Haasan’s Makkal Needhi Maiam (MNM) also extended support to the protest by farmers.
Delhi Chief Minister Arvind Kejriwal said that all AAP workers across the country will join the nationwide strike and appealed to all citizens to support the farmers.
The AIUDF along with other opposition parties in Assam too joined the chorus supporting the strike.
Ruling BJP’s ally Asom Gana Parishad (AGP) extended support to the farmers, but refrained from joining hands for the nationwide shutdown.
Pawar, whose NCP is part of the Congress-led UPA, said farmers from Punjab and Haryana contribute the most to the country’s agriculture and food supply.
In Maharashtra, the ruling Shiv Sena too came out in support like its allies Congress and the NCP.
Shiv Sena president and CM Uddhav Thackeray is against the central laws which are anti-farmer and anti-labour. We support the Bharat bandh,” Rajya Sabha MP Anil Desai told PTI on Sunday night.
Another former BJP ally, the Shiromani Akali Dal, which had snapped ties with the saffron party over the farm laws, appealed to Punjabis to support the bandh.
The ruling TMC in West Bengal had on Saturday extended “moral support” to the December 8 nationwide strike and said it would stage sit-ins in various areas for three days.
The Left parties — Communist Party of India (Marxist), Communist Party of India, Communist Party of India (Marxist-Leninist), Revolutionary Socialist Party and All India Forward Bloc — had made the announcement in a joint statement.
In Patna, opposition parties led by RJD’s Tejashwi Yadav had on Saturday protested against the farmers’ bill.
The joint forum of trade unions that has supported the farmers’ stir includes Indian National Trade Union Congress (INTUC), All India Trade Union Congress (AITUC), Hind Mazdoor Sabha (HMS), Centre of Indian Trade Unions (CITU), All India United Trade Union Centre (AIUTUC) and Trade Union Co-ordination Centre (TUCC).
The Karnataka Rajya Raitha Sangha, a farmers’ body, said it will join the “non-violent” protest on Tuesday.

Thousands of farmers, mostly from Punjab, Haryana and Uttar Pradesh, are protesting at various border points of Delhi for 11 days against the new farm laws.
The Centre’s offer to amend the contentious laws failed to cut ice with the farmer groups during the fifth round of talks on Saturday.(PTI)